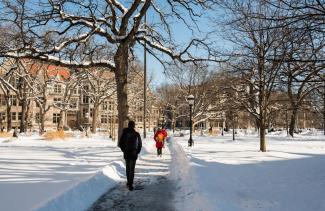 Students in the College of the University of Chicago may undertake a Minor in Digital Studies as a complement to their primary field of study. This minor is intended primarily for students who are majoring in the humanities or social sciences but may also be of interest to students in the sciences who wish to acquire computational skills in the context of linguistic, cultural, and historical studies.

Students must take six courses to complete the Minor in Digital Studies:

1. One course in computer programming. Students are encouraged to take DIGS 20001, “Introduction to Computer Programming,” which is offered annually in the Spring Quarter, but the following are acceptable substitutes: CMSC 12100, “Computer Science with Applications I”; CMSC 15100, “Introduction to Computer Science I”; or CMSC 16100, “Honors Introduction to Computer Science I.” Students who take CMSC 15100 or 16100 are expected to learn the Python language on their own before taking the Digital Studies courses listed below. (The following textbook is recommended: Think Python (second edition) by Allen Downey; it is freely available online.) A course in computer programming is a prerequisite for the other Digital Studies courses and must be taken before the student’s fourth year (or before taking DIGS 20002, 20004, 20005, or 20006).

2. One course in statistics. Students are encouraged to take STAT 22000, “Statistical Methods and Applications,” which is offered every quarter. Alternatively, they may take DIGS 20002, “Data Analysis for the Humanities I,” which is offered annually in the Autumn Quarter. DIGS 20002 has as a prerequisite DIGS 20001 or an equivalent introduction to computer programming. A course in statistics is a prerequisite for DIGS 20004 and 20006 and must be taken before the student’s fourth year (or before taking DIGS 20004 and 20006). Note that STAT 20000, “Elementary Statistics,” does not fulfill this requirement.

3. One course in data analysis using the R programming environment: DIGS 20004, “Data Analysis for the Humanities II,” which is offered annually in the Winter Quarter. This course has as prerequisites DIGS 20001 and DIGS 20002 or equivalent courses in computer programming and statistics.

4. One of the following three courses:

5. One discussion-oriented seminar course: DIGS 20007, “Introduction to Digital Humanities,” which is offered annually in the Autumn Quarter.

6. One elective course in the humanities or humanistic social sciences that has a digital component, broadly defined, and has been approved by the Director of Digital Studies. Students who wish to use their elective slot to do their own digital project and create a software product for their portfolio may do so by means of a DIGS independent study course that will count as their elective.